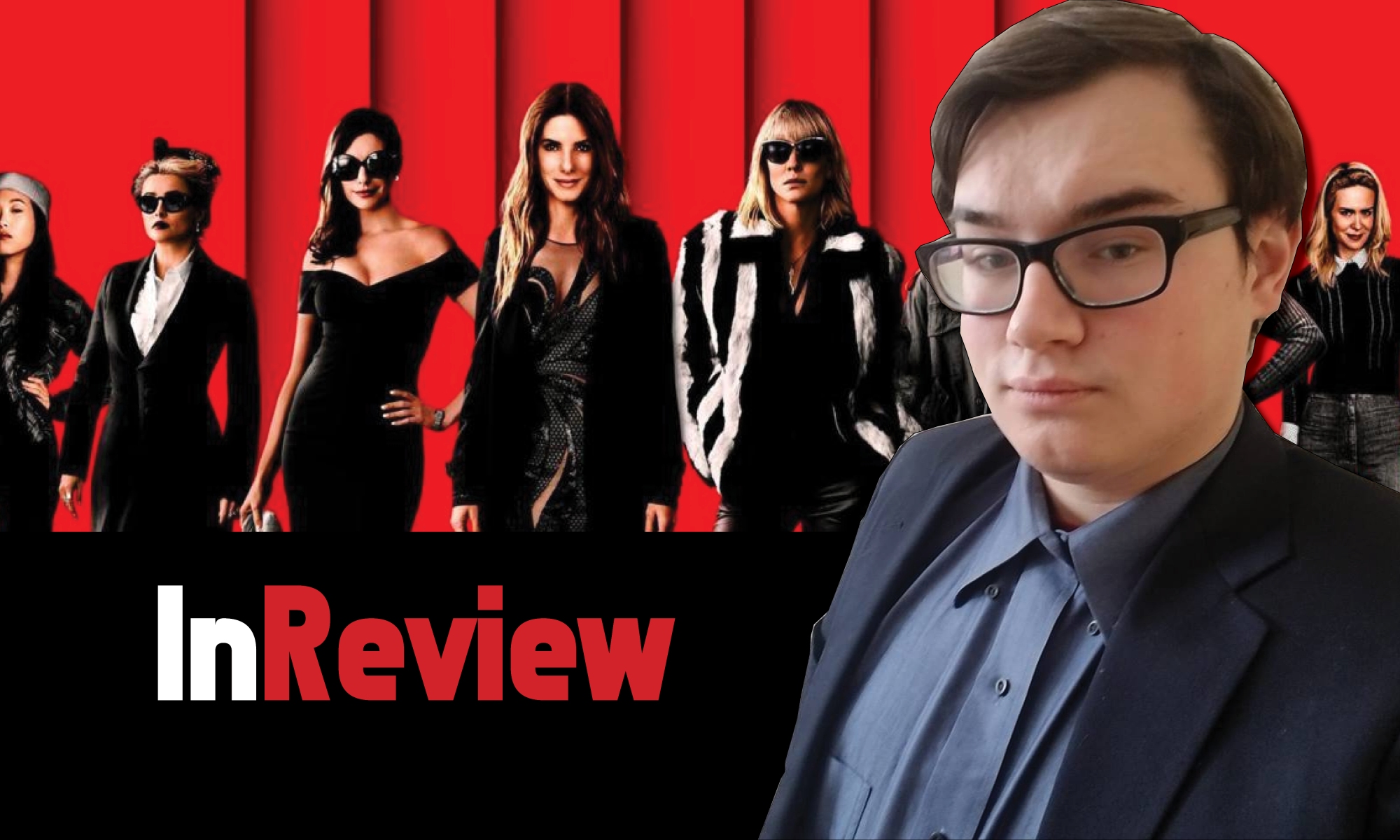 Actually, it’s not. In fact, it’s downright mediocre at times, but I guess that’s what happens when you are dead set on including a pun in your headline before you see a movie, regardless of how you feel about it.

“Ocean’s 8” is the latest installment in the long dead “Ocean’s” franchise, resurrected by Hollywood’s desperation to cram anything into theaters with a recognizable name. This time around, the film boasts a primarily-female cast, led by Sandra Bullock as the estranged sister of franchise main character Danny Ocean, Debby Ocean. This time around, the goal is to steal the Toussaint, a $150 million necklace associated with British royalty.

As someone who has not familiar with the previous “Ocean’s” installments, I was able to go into the movie without prior expectations of this one living up to its predecessors in terms of quality, tone, style, purpose — or even just spiritually. I found it strange how this one was marketed as a spinoff rather than a main entry to the series, perhaps to leave the original Ocean’s trilogy untouched, or to give the filmmakers creative freedom to do whatever they want, and keep the “Ocean’s” name.

In other words, license to be lazy.

I can’t help but compare this movie to the latest “Ghostbusters” reboot, mostly because this comparison has in no doubt already been made by many a loud, obnoxious voice on the internet. And to be clear, there is nothing wrong with gender flipping mainstream movies —  in fact, if done right, it could breathe new life into franchises that desperately need them, like “Ocean’s.” But gender flipped movies are still movies and as such, are open to criticism and must be held to the same standards as any other film, though I can get why people will defend movies like “Ghostbusters” 2016 — or even this one — despite their legitimate shortfalls. Fact of the matter is, movies that feature prominent female protagonists live or die by their box office, just like any movie — the movie industry is a business after all — so a flop as spectacular as “Ghostbusters” 2016 can and has done legitimate harm to others trying to take a crack at the same thing, except done well. So to some, it might be worth propping up a bad film in homes that it will open the door to good films of the same nature.

To be frank, “Ocean’s 8” is not “Ghostbusters” 2016. “Ocean’s 8” does not shit all over the success and legacy of the previous films, in fact it pays homage to them; it doesn’t try to shove a feminist message down the necks of people who are just trying to watch a good heist movie; and even if it’s aggregator scores on sites like Rotten Tomatoes and Metacritic are much to be desired, “Ocean’s 8” is at very least a competent movie anyone can sit through, though it greatly lacks in creativity and character-building, the last of which kind of comes with the territory when you essentially have 8 main characters sharing screen time.

Any that’s not largely on the actors, most of their performances are fine. “Ocean’s 8” brags a star-studded cast including Mindy Kaling, Cate Blanchett, Anne Hathaway, Helena Bonham Carter — and even Rihanna. Yeah, they got Rihanna to do this one, not that it was much of a step up from the you-already-forgot-this-existed Dreamwork’s “Home” and the creative-yet-lacking “Valerian and the City of a Thousand Planets.”

My complaints about the film are few, though they keep the film back from being something I’m going to remember in two months. Like “Ghostbusters” 2016, “Ocean’s 8” realized that it takes a lot more than just getting a room full of talented actors in your movie, you have to have actual direction and good writing. For a heist film, “Ocean’s 8” plays it way too safe. The film is too afraid to have its own style — though can you blame it when you have to follow up Steven Soderbergh; it’s characters are paper-thin and are written more like role models than actual people with personalities that we should care about; there is little to no internal drama amount the team, everything goes off without a hitch; and the film has a very simplistic goal that it achieves pretty unimpressively.

Say what you like about any movie that Warner Bros. makes based on a Detective Comics comic book, but at least those films have ambition. They fall flat on their faces and completely miss — save “Wonder Woman” — but at least I get the sense that those movies are trying to accomplish something. “Ocean’s 8” has no ambition, and much like “Ghostbusters” 2016, I get the sense that perhaps the studio was afraid to challenge its cast in interesting and unique ways.

Sandra Bullock comes close to having a character, but every time I saw her on screen I saw her as Sandra Bullock and not as Debby Ocean. Her character was so lacking that I had to look up her name. Cate Blanchett is woefully underutilized, a shame seeing as general audiences not too long ago got a taste of her versatility in “Thor: Rangnarok.” Mindy Kaling’s character is Mindy Kaling, but that can be attributed to her whopping three minutes of character development that sets her up more as a tool for the Ocean’s team to use than an actual person. Awkwafina, who plays the team’s pickpocket, Constance, has somewhat of a character but comes off mostly as annoying and not as someone I could sympathize with. Helena Bonham Carter put in an average performance as a fashion designer the team uses to get close to the diamonds, but again, she wasn’t given much to work with. Sarah Paulson played Sarah Paulson, and didn’t need to be in the movie. And Richard Armitage, who plays Sandra Bullock’s estranged boyfriend who is the reason why she’s in jail at the beginning of the movie could be replaced with a block of wood.

With that being said, Anne Hathaway and Rihanna comes the closest to having characters, in fact I would say that Rihanna’s character, Nine Ball, is the best character in the whole movie. I like how we actually get to see a glimpse of where she’s from, what her motivation is, and why she has the abilities that she has. That, and Rihanna does have a bit of charisma on screen, something that will hopefully be utilized in more promising projects. As for Hathaway, shes’s Anne Hathaway, and she’s loving it. Her performance is almost banking on the fact that most people might recognize her from her “Princess Diaries” days (which they even cleverly tease in the film), especially considering the type of character she’s playing (a model). She’s not afraid to go full diva, and I have to admit, even though I was not expecting this from an “Ocean’s” film, I loved it.

None of this make the film great, and it is competently shot, even if it is tone deaf, and I mean that quite literally. The soundtrack in this movie is downright distracting, turning scenes that would have normally had tension into emotional vacuums. I don’t see why Director Gary Ross saw the need to play stock music over the actual heist scenes — perhaps it was a lack of confidence in his own product — but the music he chooses actively detracts from the experience, and for a movie that clearly wants you to take it seriously, it only serves to undercut those efforts.

But this isn’t a bad movie, either. It’s a perfectly ok popcorn flick. It’s harmless, and probably won’t spawn a sequel. Maybe they’ll reboot “Ocean’s” in 10 years, but I doubt it. What “Ocean’s” needed was a masterstroke to become relevant again — a “Mad Max: Fury Road,” if you will; guns blazing, a potentially award-winning script and tight direction from somebody who knows what they’re doing. Maybe hire an action director, to throw in some of those scenes.

But who knows? All I can do is leave you guys with a final review score. And this one is perfectly middle of the line.