The last review I wrote spoke of a series whose third iteration totally tanked. Now I want to give focus to a trifecta of games in another series which was absolutely brilliant — the “Rebuild” series. Right in Sonny’s backyard (flash game, moderately popular for a period of time, zombie game, defunct for awhile before getting a third installment, the whole enchilada), “Rebuild 3: Gangs of Deadsville” was an absolutely reanimating success in virtually every way imaginable. Mechanically, structurally, this game picks up where its predecessors left off and raises the bar miles high in the sky.

As there are very few things that are actually bad about the game, let’s first analyze the improvements made from first two “Rebuild” games:

1. There are other survivor communities who are interactive: In “Rebuild” 1, it was just you vs the zombies. Not bad, but it could grow tiresome after awhile. In “Rebuild 2,” you can go to war with the Last Judgment Gang, but they aren’t actually “there,” but are always directly off camera. Again, not bad, but it can get tiring.

Northway Games heard these criticisms and hammered them down with an iron fist. Not only can you actually control and heavily influence wars with opposing factions, you can decide to ally with them, trade with them, tag team with them in missions your own community does, and more. What’s more, the LJG and the Riffs aren’t the only communities of this kind; there are six other communities, and a random assortment of up to three of these eight factions will hold territory on the map you’ve begun your game on. Some of these factions don’t care about each other at all, whereas some of them (such as the aforementioned LJG and Riffs) will be actively warring with one another. The randomness and volatility of the turf that your community establishes itself in helps add to the overall replay and immersion the game offers, and also transforms the game significantly.

2. The game is much more friendly towards different styles of play: Whether you’re new to the game and just want to burn time in a casual manner, or you’re a diehard masochist interested in the gaming challenge of a lifetime, difficulty settings in “Rebuild 3” are much, much more supportive of your playstyle than in games past. In Rebuilds 1 and 2, there were three difficulty modes. “Nightmare” mode in these two games was designed to be literally impossible to beat, while “Easy” is deceptively misleading; it is so elementary that my dog could beat it. The proposed middle ground is “Normal”, and it’s not terribly different from “Easy” mode. This sapped away a lot of replay value in the past two Rebuilds. “Rebuild 3” introduces five difficulty levels, “Very Easy,” “Easy,” “Normal,” “Challenging” and “Nightmare.” You can have fun with any of these modes. Only “Very Easy” is truly elementary, whereas “Nightmare” is insanely difficult, but can be beaten by those who truly have an elite sense of survival and can think on the fly (you now only have a limited amount of time to complete a day!)

3. The game has an actual story mode: Rebuilds 1 and 2 were largely sandbox games. Not bad, but not great. “Rebuild 3” has a story to it, and unlike its predecessors, it actually has a setting! While the player may choose to rename the cities anything they want (it’s a decent amount of fun renaming a given city to be your hometown, after all) the story is based around the Canadian border in America, starting in Washington, D.C., and eventually working its way into Canada, all the way over to Vancouver (which, coincidentally, is creator Sarah Northway’s hometown). One of the factions, the Government, also becomes a huge antagonist towards the end of the game. Having a story and forcing key interactive “choose your own adventure” decisions on the player makes the game incredibly immersive and further adds to the replay value of the game. Your decisions actually count for something now!

4. There is a lot more micromanaging in this game: Ammunition, Materials, Fuel and individual survivor happiness are now things the player must learn how to manage. In Rebuilds 1 and 2, using wood to construct walls to reclaim pieces of the city, and adding them to your community was something you just freely did without consequence. Also, ammunition apparently fell out of the sky; there was no retribution for loading survivors up with the biggest, baddest and noisiest weapons you had in your stash. In “Rebuild 3,” you have “materials” which you can’t reclaim property without, and you have ammunition which, as you probably expected, is needed to actually use your guns as anything other than blunt tools. This gives more weight to player decision making: Should one sole survivor armed to the teeth waste all your ammo on one key property? Is it better and more efficient to send a team of less-armed survivors? Or would you be better off conserving your materials and waiting until it’s a better time to get that key property? Despite the limitation, this gives more power to the player, especially in “Nightmare” mode where these decisions are critical to get correct, like it would in a real apocalypse. 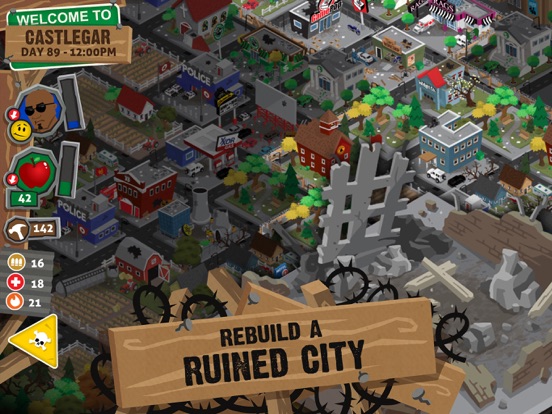 Of course, like with any game, “Rebuild 3” is not without its flaws, however minor they may be. Let’s address them here:

1. In the early game, interaction with other factions is a little bit limited if you choose to go to war with them: If you are planning to be a bloodthirsty, murderous, “shoot first and ask questions never” type player, you might feel somewhat disappointed if you war with other factions in your city in the early game. If you defeat the factions, you will, in theory, hold a powerful decision in your hands; do we let the survivors of the war walk free, try to recruit them to join us, or kill them all? Letting them go or recruiting them works as advertised, but if you really disliked the faction leader and wanted to smite them, you would definitely be disappointed that the game simply doesn’t allow this.

Playing devil’s advocate for a moment, certain characters such as Davis from the Government need to be around for the end of the game so they can really take center stage as primary good or bad guys, depending on the faction, but there could’ve been a way around this. Maybe Davis is only present at the end of the game, only being referenced towards by lesser authority leaders in the earlier game. Maybe killing them or being merciful would change the way faction leaders later in the game treat you. For example, a member of the Government who is lower on the totem pole than Davis could be a faction leader in a lower level city. Killing them could make Davis angrier and less tolerant of you when you reach the end of the game. Making an alliance with them could do the opposite. Warring and defeating them, but allowing them to walk free or recruiting them could also alter Davis’ mood towards you at the end of the game. This was a core mechanic that was a big missed opportunity, and it seems like this could’ve  been avoided pretty easily. Though in truth, it hardly detracts from the story and could be viewed as petty and semantic, but it definitely could have made the game a little bit better.

This is all good and fine, but a player who wanted the full, detailed experience of warring with the Government or LJG in these instances will probably be leaving with their hands empty. If you war with the Government while the Rotten are around, if your Respect from the Rotten is above a 50 (virtually guaranteed, you rapidly gain respect from them as you attack the Government, and would basically need to simultaneously war with the Rotten to avoid this) you will find that they one day “accidentally” blow up the entire Government base. Whether you had taken one, all but one, or flat out had yet to even launch a formal attack against the Government, the Rotten will “aid” you by levelling every single property the Government owns with what the game describes as an “explosion” and ending the war right then and there. This is great if you’re trying to maximize your score by finishing a city as quickly as possible, but if you didn’t care for your score and were more focused on the actual gameplay, not a speed run, you would probably feel that this is fairly anticlimactic.

The Riffs vs the LJG work under a similar manner. If you ever reclaim a shopping mall as a property, the Riffs will one day ask you to arrange the shopping mall as an arena they may use to “duel” with the LJG in. If you help the Riffs during this duel, they will defeat the LJG, storm their property, and, much like the Rotten, single handedly destroy everything the LJG had. The LJG will be vanquished completely at that point. While this might not even be a bad thing for some players, a first-time player might feel a bit let down through losing the experience of a full out war with the hated LJG.

Semantics aside, “Rebuild 3” is a riveting experience that anybody can enjoy. It’s very user friendly, there are no key elements of the game you lose by having not played its predecessors, so you can just jump right in without fear of missing any context. It’s very creative, interactive, immersive, and has a ton of replay value. I would recommend this game to anyone, regardless of their age or interests, as this is a game that can reel someone in very easily and get them to stick around for awhile. Definitely play this.