Until a few short days ago, Telltale Games was one of the most beloved companies in gaming. Responsible for bringing amazing hits such as Game of Thrones, The Wolf Among Us and, of course, The Walking Dead, to the video game world as classic interactive stories, the company played the role of, and seemed to be a titan in the industry, infallible and capable of just about anything.

Then, a few short days ago, this happened: 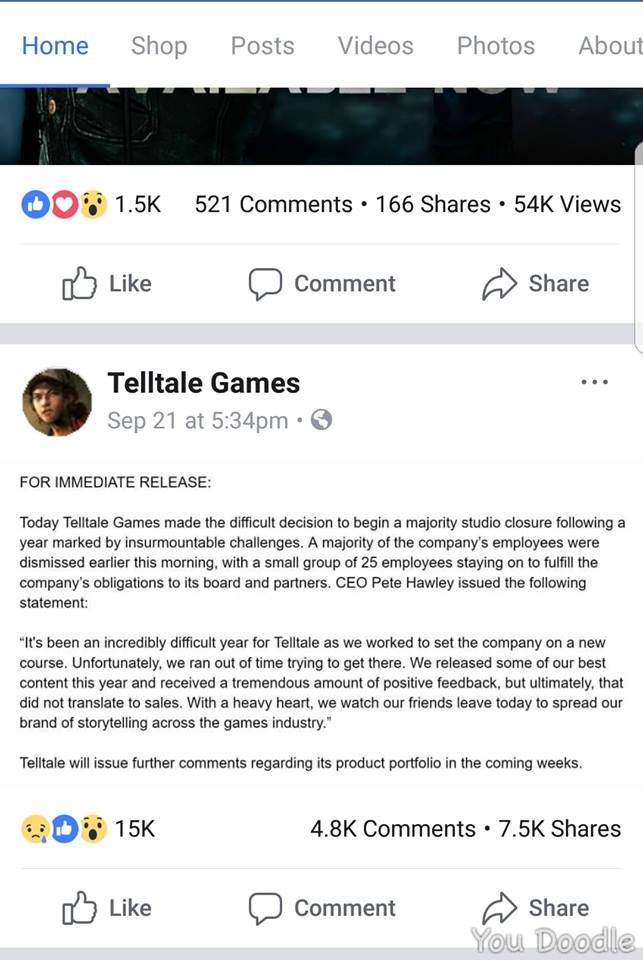 Yeah, that was about as abrupt as it was shocking and, quite frankly, disappointing. However, once the guise was off, it became apparent that Telltale was never actually all that great. Hidden beneath the visage of their hit titles were games that actually flopped on the market more than the company revealed.

First, let’s have a look at how it all happened, in several chaotic steps:

2. Telltale Games had to hire more employees, putting more people on the payroll

3. When they still couldn’t roll out content fast enough, they worked employees and managers illegally long hours and made oppressively bad workplaces (as indicated by former CEO Kevin Bruner’s lawsuit against the company back in June)

4. Because their content was taking so long to release, most people began to wait until entire seasons were done to purchase and play the whole thing as they wanted. When Telltale was forced to give discounts on entire seasons, their bottom line continued to suffer, while their base of operations continued to depreciate

5. Eventually, the company ran out of money, ran out of time, and had to dismiss over 90% of their original staff

That begs the question though; why was #1 the case? How was the company not trotting out new episodes and games fast enough?

It could have a lot to do with the competition. For this portion, I would like to highlight Dontnod Entertainment’s masterpiece in the “Life is Strange” series, one which will incidentally see a third version very soon. How did their two seasons of content outperform Telltale Games’ dozens of episodes and several seasons worth?

It’s simple: Telltale Games spread themselves too thin, and this was a self defeating process which was very slowly murdering the company. They took too long to come out with new episodes, which turned off their consumerbase, and the episodes they did come out with weren’t long enough to stand up for months at a time as the company expected. What’s more, as many would agrees in Seasons 2 and 3 of The Walking Dead, the episodes just didn’t hold up. The quality depreciated, and just like that, the massive house of cards Telltale built up in TWD’s first season crashed and burned. Meanwhile, Dontnod didn’t suffer from this problem. Life is Strange was episodic, but had less episodes that favored more content in each episode than Telltale’s content. This, combined with just how intricate and carefully crafted each episode was, put their sales and feedback levels through the roof. This also made it so that Dontnod didn’t have to develop multiple games at a time, hiring tons of employees and working tireless hours, because their content was being made at a reasonable pace, was generally much better in terms of quantity, and did a masterful job of reeling fans back with minimal cooldown periods inbetween content.

That being said, Telltale Games’ time in the sun is very clearly over. They will finish their Minecraft video game, may or not complete The Walking Dead, and then they’ll bite the dust. I hope their former employees find work quickly. That said, let’s have a look at what Telltale Games did well:

This could be viewed as double edged on paper, but Telltale truly reached out to a bunch of different franchises and genres. Going from thriller, horror esque titles such as The Walking Dead, to murder-mystery type ones such as The Wolf Among Us, to the beloved fantasy thriller of Game of Thrones, even touching base with the Marvel Universe with their own iteration of Guardians of the Galaxy, and going further across the superhero universe with two masterful seasons of Batman, Telltale did it all. Even though it didn’t end very well or gracefully for them, it cannot be said that they weren’t ambitious at the very least. Even if their ambition wasn’t always particularly ethically grounded.

2. Their character development was always on par

While technically, the player could be argued as the primary source of character development, Telltale did a fine job of, well, telling tales; they really made excellent interactive stories. While the player made a lot of impactful decisions, a lot of time, their character and world were properly effected, and this gave a good sense of player agency. This designation is somewhat challenged by TWD’s Seasons 2 and 3, but beyond these seasons, especially in Game of Thrones, the character development is great.

3. The replay value was great.

But wait, what if I go back and redo that decision? What would’ve happened? Anyone who plays Telltale Games stuff has asked themselves this a gazillion times. This made us actually want to keep playing their games. Me, I played through Season 1 of The Walking Dead seven times because of this. This gives their games a surprising amount of depth.

Ultimately, Telltale, while maybe not working entirely within the law, deserves a solid B+ for all of their content they trotted out over the years. That grade would decline, of course, if the company could not finish the heavily awaited final season of The Walking Dead, but even still, the company definitely will leave behind a heavy, influential, digital footprint that will be remembered for years to come.