The horror genre and video gaming have always had a finnicky relationship. On paper, directly involving the player in a horror story might seem to be a great way to give them a good, memorable, thrilling and scary experience, this doesn’t always work in practice. This has been evidenced time and time again by numerous terrible Resident Evil video games, and a lot of other attempts- such as Call of Duty’s famous Zombies mode- have given up on trying to scare the player altogether- preferring a more action packed, intricate plot to simply trying to scare the player.

In lieu of this, Behavior Entertainment’s Dead by Daylight is a refreshing, fun, and unique game.

The premise of the game is pretty simple; one player takes on the role of the killer, going up against four other players playing the survivor role. The game is asymmetrical, in the sense that the killer plays in first person perspective, whereas the survivors get a more broadened third person point of view.

While there are numerous things both sides can do during a typical game, the endgame for both is fairly straightforward. Survivors want to successfully repair five out of the seven generators randomly spawned on the map, while killers want to kill the survivors. In the case of the latter, the most common way is for the killer to severely injure the survivor, pick their body up, and place them onto a large, hanging sacrificial hook, to be sacrificed to the omnipotent Entity. However, there are other ways the game can end that prevent the game from getting too stale and make it so that no two games are alike. For example, if the killer seems to be dominating the survivor team, and has managed to successfully kill three of the four survivors, the last survivor still has one way left to win the game; they can locate the Hatch, jump into the magical trapdoor, and get out alive that way. They could also still opt to reach the Exit Gates even if all the generators haven’t been powered. For the killer’s end, in select games, the killer could end up bringing what is called a “Mori”. Use of this item allows them to ‘kill survivors by their hand’ which bypasses the need to sacrifice them to the Entity, and allows the killer to simply, in the most straightforward way possible, kill the survivor- usually by just repeatedly stabbing them a lot, or causing some other kind of fatal wound of some kind.

So with that all out of the way, where do we begin in assessing this game? Per the usual, lets have a look at some upsides and downsides for this Behavior Entertainment product.

Beginning with the good aspects of the game:

1. The variety within this game is incredible

There is loads of content in this game. In fact, it is very easy to forget how one dimensional this game should be on paper because of how easy it is to just get lost in the sheer depth of the game. If you came to this game because you heard that the Scream series’ very own Ghostface was added to the game recently, you aren’t alone! Ghostface isn’t the only iconic name, however; Freddy Krueger of Nightmare on Elm Street, Michael Myers from Halloween and the classic Leatherface from Texas Chainsaw Massacre are just a few other choices from a total of sixteen killers, all of which are completely different and have very different dynamics of play from one another. On the survivor side of things, there are also some iconic names available to play as too. Ash Williams of Evil Dead and Detective Tapp from Saw make up a group of sixteen playable survivors, all of them playing different roles for potential teams based on their unique ‘Perks’. That’s to say nothing of the totally different eleven maps you could end up playing on, many plucked straight from aforementioned horror movies. Considering the fact that the killer and survivor can equip themselves with up to four different, unique perks and use ‘Offerings’ to alter the dynamic of the game even further, and you’ll find that no two matches are alike.

2. The game is incredibly addicting

It is incredibly easy to get hooked (pun absolutely intended) on this game. It employs a simple level up mechanic and distributes it to each survivor and killer in the game. As you could probably imagine, repeatedly leveling a character up makes them stronger and gives them more tools to work with. This mechanic is further supplemented by the Survivor/Killer rank system. If you continue to have successful games as either role, you’ll “Pip up” until your rank grows. As your rank grows, you will find players with ranks close to yours, keeping the collective skill level on par. Slow learner? Don’t fret, you’ll get groups of newer/less skilled players until you’re ready to go to the next level, and vice versa if you pick the game up quickly. This ranking system keeps the game fresh by ensuring new players don’t get beaten badly by more experienced ones, and adds to the overall addiction level of the game. The ranking and level up systems also set clear goals in front of the player, and incentivizes players who reach these goals. 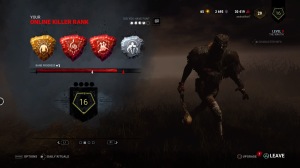 3. The game is incredibly cheap, considering the value you get out of it

This game is, at the time of writing this, on the shelves at Gamestop for a mere $12. For reference, three year old Call of Duties and Madden games which are severely outdated and not worth playing at all are priced roughly in that range. Don’t let the price tag dissuade you into thinking the game is a cheap way to burn a few days, however; the previous points discussed on this article would firmly disprove that notion.

It is difficult to find a video game somewhere without flaws, and Dead by Daylight sadly isn’t an exception. Let’s have a look at some of its shortcomings:

1. The game is severely unbalanced

Like any game with some sort of binary conflict (killer vs survivors in this instance) there is a “metagame”, and you will quickly find that some perks, offerings, and of course, killers and survivors, clearly stand tall above their peers. Unfortunately, this game takes that standard to a fairly comical extreme. If you came to this game because you were excited to play as the renowned and revered Freddy Krueger, you would likely be extremely disappointed to find that Freddy is an extremely poor choice for a killer, easily and by far the worst in the entire game, because of how poor his ‘power’ is. While survivors cannot initially see Freddy, he cannot actually damage them until he spends a minimum of seven seconds standing there and tediously trying to put them into his Dream World, where he can then finally damage them. The catch is, survivors have numerous, frankly stupid ways of easily countering this; running out of Freddy’s line of sight disrupts his attempt at doing this, and even if he succeeds, survivors can spend three seconds pulling each other out of his Dream World, and they have numerous other tactics to easily escape it as well. Juxtaposed to that, The Nurse is widely viewed as the strongest killer in the game. This is because she can simply teleport towards survivors, easily getting the jump on them no matter how they choose to try and flee her. There is a massive slew of pitifully useless perks and offerings. The few which are useful are omnipresent in the game due to how great they happen to be. A game which boasts such variety would be so much greater if it did a better job balancing these aspects of the game. Thankfully, Behavior Entertainment announced recently that, before 2019 comes to a close, Freddy Krueger will receive a “reworking” which will certainly make him a much better killer, meaning that the company has begun to address this particular shortcoming to a decent extent. Still, the dynamic of this shortcoming has existed since the game launched on PC three years ago, meaning the company as a whole has a proven track record of not being adept at balancing the game.

2. The community within the game is unfathomably toxic

It is hardly fair to blame the game and developers themselves for this. However, given that the game cannot be played without other players, it’s important to address just how consistently terrible plenty of people who play this game are. As a point of reference, this criticism has never before appeared in any of my previous articles here on InReview, including those written about the controversial playerbases of the Smash Bros, South Park and Neverwinter communities. While there are obviously decent people who actually play this game, there are also people who love finding things to complain about in the game, people who “face-camp”, an act of hooking a survivor and standing straight in front of them, essentially ending their game and preventing other survivors from saving them, and there are ‘lag switchers’- select killer players who abuse the fact that they are the ‘host’, and tinker with their internet connections repeatedly during a game to give themselves an unfair upper hand. Simply put, the framework of this game has, to some extent, invited some terrible people to play it. While playing with random people via public matches isn’t always a bad idea, you will sometimes be paired with survivors who do nothing but hide all game. You will sometimes find survivors who actually help the killer, or will point out your location with the hopes that the killer will leave them and come for you. This is just a small list of how many strictly negative roles people within the community can play; let me assure you the exhaustive, comprehensive list is much, much greater. Try to grab some friends for the “Survive with friends” mode. If you can’t, you might have a tough time.

3. Even after being out for three years, there are still some annoying bugs in the game

While somewhat uncommon, sometimes the Exit Gates in the game glitch. Running through them causes you to just fall of the map, where you will then die after the Endgame sequence times you out. In this very same glitch, you and other players can’t heal you, snap you out of the Dream World, mend you, or interact with you in any way. For a more dramatic idea of the glitches that can happen, there are also times when running right in the middle of the map can essentially ‘freeze’ the player running there, preventing anyone at all, killer or survivor, from doing anything to them. These instances are somewhat rare, but it is definitely troubling that they exist at all considering Behavior Entertainment has had three years to fix them.

Explanation: Considering how cheap the game is, and how easy it is to just sink tons and tons of time into it, this game is a raving success. Its flaws are mostly fairly rare and/or don’t seriously inhibit the overall experience of the game, and they certainly don’t outweigh the game’s positives at all. Get this one for your libraries, folks, and you won’t regret it at all.