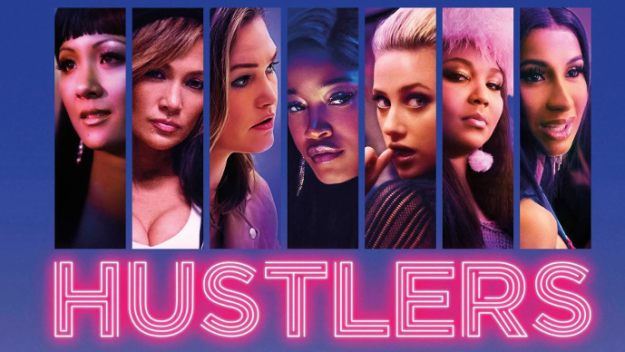 When watching this movie, I was reminded of my review of “The Kitchen” and how we seem to be living in a wave of movies reminiscent of traditional crime movies, but where women take the helm. “Ocean’s 8” has women infiltrate the roles previously held by the Rat Pack and George Clooney, “The Hustle” was an female led reboot of the 1988 film “Dirty Rotten Scoundrels,” and back when I was watching “The Kitchen,” I was reminded of “Goodfellas” but with a more empowering ending. And with this film directed by Lorene Scafaria, we get the female answer to “The Wolf of Wall Street.”

Based on the article “The Hustlers at Scores” by Jessica Pressler, the movie’s is framed as an interview between Dorothy (Constance Wu) and Elizabeth (Julia Stiles). Dorothy started as a stripper in 2007 and learned the ropes from veteran dancer Ramona Vega (Jennifer Lopez). But after the financial crisis, Dorothy is forced to leave her work and start a family. A few years later, she returns to the club she used to work at and learns that its standards have declined. When she reunites with Ramona, Dorothy gets involved with a scheme Ramona runs with her proteges, Mercedes (Keke Palmer) and Annabelle (Lili Reinhart). The scheme involves them drugging rich men with a mix of MDMA and ketamine, take them out partying, and max their credits cards out. But as their work escalates and competition builds up, Ramona and Dorothy are forced to lower their standards for workers and get junkies and criminals in their ranks, which drives a wedge between Ramona and Dorothy.

One of the strengths of this cast is the chemistry between the two leads. Constance Wu and Jennifer Lopez have a strong bond that personifies the sense of sorority between the two. Each of them brings a distinct skill to the operation; Lopez has the street-smart angle as the architect of the scheme, while Wu is more calculated and tries to add the legitimacy to the whole thing. Their relationship makes the moments where the partnership is tested more tense, after watching Lopez take the young Wu under her wing and help her out. Julia Stiles is also interesting to watch; while piecing Dorothy’s side of the interview with other account, she has a strong observer that the audience is meant to take in Dorothy’s story.

As mentioned earlier, the story feels like “The Wolf of Wall Street” with the “based on a true story” feel. But unlike the Scorsese film, the protagonists are still likable. This isn’t to say that likability is a vital character trait, but rather an observation. The likability adds more of a human element that Jordan Belfort lacked. And after reading the article the movie was based on, there is a strong parallel between the strippers and the Wall Street brokers who paid for them.

While this trend of women-led crime dramas is still relatively new, movies like this show that it can be interesting. The cast and story compliment each other and support each other. Despite how many other films have been met with negative or decent reviews, a movie like this shows the promise filmmakers can have with this concept.