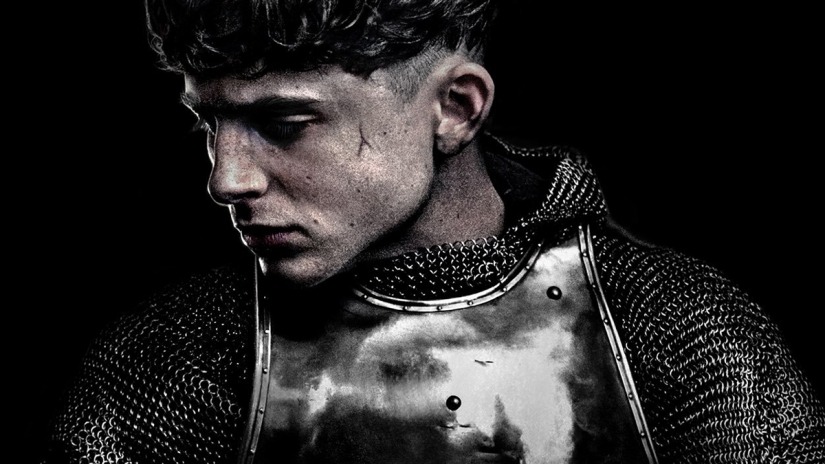 Netflix is great and terrible, as it is one of the only platforms willing to finance risky and different original content like “The Highwaymen”, “Extremely Wicked, Shockingly Evil and Vile,” “Bright,” and countless creative TV shows, while it also is a harbinger of death for properties its acquires, as sometimes its new content is rushed out the door without much regard to quality.

Director David Michôd’s “The King,” is a film loosely based off of Shakespear’s Henriad trilogy of plays, focusing on the life of young Prince Hal, or as he would later be known, King Henry V (Timothée Chalamet). We see Hal’s journey from an estranged Prince to the mad King Henry IV (Ben Mendelsohn), who has cast him away for getting into debauchery, while Hal’s brother, Thomas (Dean-Charles Chapman) has stepped up to lead the armies of England against Henry IV’s political rivals.

Hal is a reluctant leader, and he deeply disagrees with his father, who has named Thomas his heir to the throne despite Hal being his eldest son, though Hal didn’t want it in the first place. While the film doesn’t get into much detail, it is implied that Henry IV has ruled with an iron fist, killing anyone he thinks he can’t trust, even if it is over a misunderstanding, and we learn that his ultimate goal is to have war with France, and claim it for his own.

Hal’s world gets turned upside down when Henry IV and Thomas dies, leaving him the lone heir to the throne, which he reluctantly accepts. He vows to bring peace to the kingdom, undoing all that his father did. The young Hal, who looks like he’s barely 20, is plunged neck deep into the bureaucracy of being king, and his lack of experience is exploited by those around him to pressure war with France, and they find paper-thin and questionable reasons to do so.

Hal faces questions about his legitimacy as king from day one, and as such, feels a great need to not only give his subjects what they want (or rather, what his advisors tell him what they want), knowing that the easiest way to bring unity to the kingdom is to unite them against a common foe: France. He faces corruption in his court, which he attempts to weed out and correct by executing those he deems unloyal and by bringing his longtime friend and disgraced knight Sir John Falstaff (Joel Edgerton) into his court. Falstaff gives him upfront, honest advice nobody else can, as he doesn’t dear him as the king; he still sees him as a friend who needs his support, and when war with France is declared, Henry V chooses Falstaff to lead the campaign.

The film’s set design and cinematography are splendid. It goes for a realistic portrayal of what the real life battles and medieval Eruope probably looked like, which brings a lot of perspective to the Shakespearian tales, specifically how, while Henry V’s war has a big imprint on human history, the conflict was relatively small when compared to what we routinely see in cinema. And it is through these simple yet honest production qualities of the film that it is able to establish a believable reality that allows the film to have a lasting impact an overproduced or underproduced film might not be able to.

Modern viewers might raise an eyebrow as a young-20-something leads an entire kingdom to war, but remember, life expectancy in the 15th century was not what is was today, and King Henry V was dealing with an incredibly low-tech England, and as such, had to make life or death decisions based on personal trust and limited information that could all too easily be tampered with. His advisors themselves were not much older than him, with his father appearing to be in his 30s at his time of death.

There are several notable performances in the film. They include:

Timothée Chalamet as Prince Hal/King Henry V: Chamelet brings unique energy to Hal, and perfectly portrays him as someone in over his head, but trying to do his best with what he was given, though his character development isn’t always believable, specifically when he takes a big leap from being compassionate and having his end goal be peace, to being someone who is willing to kill unarmed prisoners.

Joel Edgerton as Sir John Falstaff: Edgerton doesn’t get enough screen time in this film, but he convincingly plays Falstaff as a has-been who reluctantly answers the call of duty. It’s alluded to that he has become a drunk because of his experiences with war, and he has given up on life because of that, but I felt like his motivations could’ve been more defined.

Robert Pattinson as the The Dauphin of France: Pattinson plays an arrogant, long-haired French prince who battles and taunts the armies of England. Although he is older than Chalamet, he comes off as very immature and not too bright, which adds to the believability of the film. Not every medieval royal family member was a genius. There is a great scene where he initially confronts Henry V and delivers a speech that is meant to intimidate him, but comes off as something that sounded better in his head.

Sean Harris as William Gascoigne, the Chief Justice of England: Gascoigne quickly becomes one of Henry V’s most trusted advisors, initially replacing Falstaff, who he forgot about in his ascent to the throne. Gascoigne is eventually revealed to be one of the main people manipulating Henry V, and Harris delivers a great performance as a snake oil salesman you don’t suspect until it’s too late.

Ben Mendelsohn as King Henry IV: While Mendelsohn is in the film only shortly, he delivers an intriguing portrayal of what essentially was an unhinged crazy guy nearing the end of his life, who had too much power.

“The King” is not a perfect film, and its structural flaws cannot be excused because it was based on something. The film loosely follows Shakespeare’s Henriad plays, which already fictionalized historic events. As such, motivations could’ve been tighter, and while the film does a decent job immersing viewers in its world, I feel like it could have done more to establish itself, mainly what was going on in relation to its conflicts and why should be care.

“The King” probably would not have gotten produced on any other streaming platform, and for that, I applaud Netflix. It’s not perfect, but it’s different and interesting, and that alone makes it worth a watch.