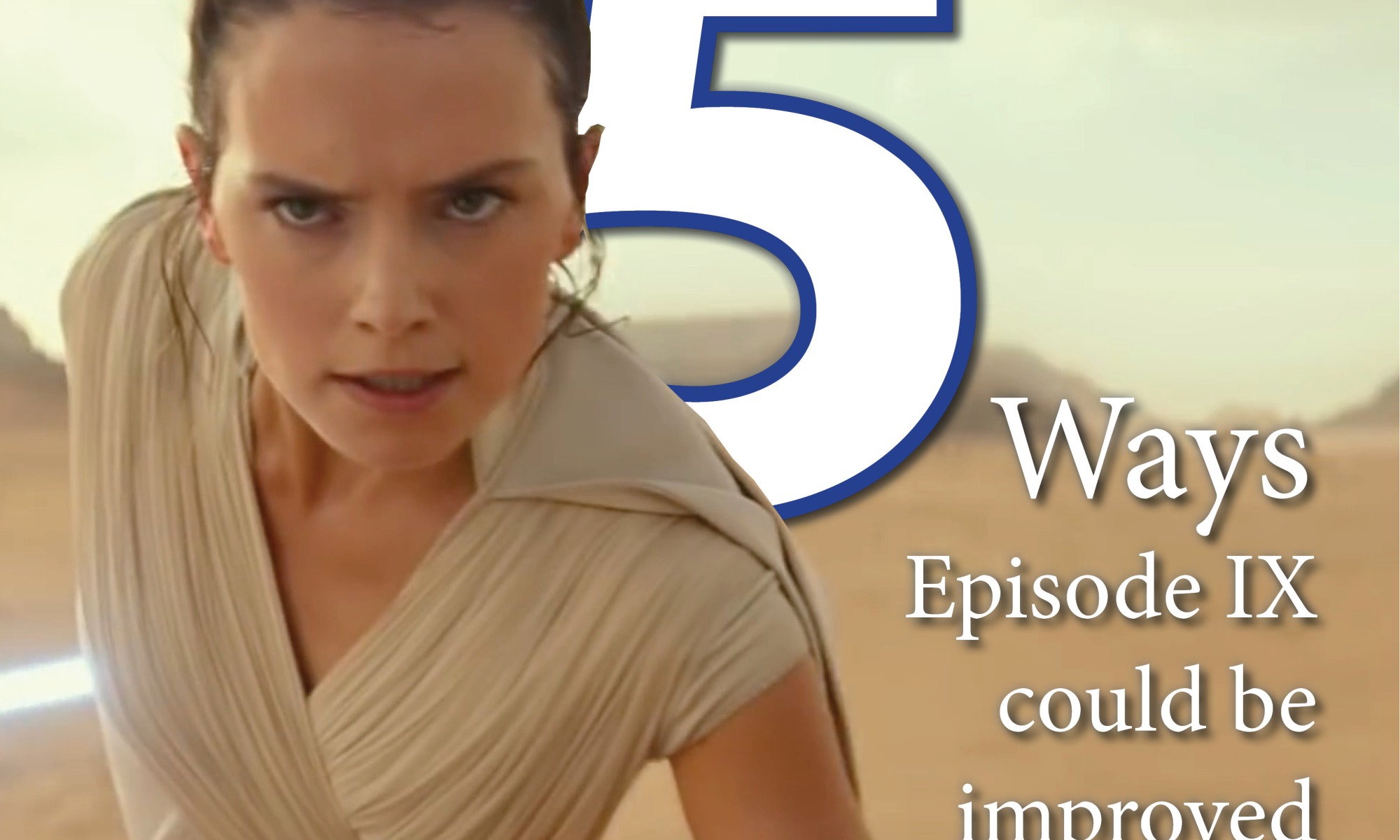 With “Star Wars: The Rise of Skywalker” out for over a week and greeted by mixed reviews and a predictably healthy box office haul, it’s left many fans irked by its creative choices, myself included, which I’ve detailed in my official review of the film, as well as my list of ten mistakes Disney made in the film.

However, I’m not going to complain about the film without offering some remedies. Here are five ways I think “The Rise of Skywalker” could be improved.

5. Cut out the fetch quest

In the opening scene of “The Rise of Skywalker,” we see Kylo Ren (Adam Driver) track down a Sith Wayfinder, and travel to the hidden Sith world of Exegol, where the previously-thought dead Emperor Palpatine (Ian McDiarmid) is hiding.

Afterwards, protagonist Rey (Daisy Ridley) and friends spend most of the movie going on fetch quests to get the very same item, wasting the audience’s time.

Have Kylo send Rey the coordinates, like **spoilers** Rey would do later in the film, sending the coordinates to the Resistance. Kylo wanted Rey to travel to this planet anyways, so they could confront Palpatine anyways, so it makes no sense to keep the planet hidden from her.

4. Edit Zorii Bliss and Jannah out of the movie

Zorii Bliss (Keri Russell) does nothing but give protagonist Poe (Oscar Isaac) a McGuffin that advances the plot. Jannah (Naomi Ackie) also only serves to get the main characters from point A to point B, and to set up a ridiculous scene in which our main characters storm a Star Destroyer on horseback.

Both tease deeper relationships with main characters that will probably be explored in a book, with Zorii hinting at a romantic relationship with Poe, and Jannah possibly being related to protagonist Finn (John Boyega) or legacy character Lando Calrissean (Billy Dee Williams).

However, “The Rise of Skywalker” is already crowded as it is, and really needed to focus on resolving the major arcs of its main characters. Bliss and Jannah’s inclusion also forces the film to completely drop or forget about already-established side characters in Rose Tico (Kelly Marie Tran), Maz Kanata (Lupita Nyong’o), and the codebreaker DJ (Benicio Del Toro) from the last film.

There is simply not enough time to build the groundwork for major new faces.

To some extent, the same can be said of Allegiant General Pryde (Richard E. Grant), though with previous big bad Supreme Leader Snoke (Andy Serkis) killed off, it makes sense that the film would focus more on the First Order’s higher command. Though I do agree that he should not have unceremoniously taken the reigns of the military force from series main General Hux (Domhnall Gleeson), who could and should have grown from being a cartoon supervillain to a complete person, maybe driven to do what he does by tragedy.

Disney Star Wars is ashamed of the Star Wars prequels, which is a shame, because most of the Jedi and Sith in the Star Wars universe come from those movies.

But Disney wanted to have its cake and eat it, too, hence we got the confusing climax in which all of the past Jedi flow through Rey and all of the past Sith flow through Palpatine. We even get a cute little moment that will confuse most people who aren’t hard-core fans, as Jedi from the prequels and original trilogy talk to Rey to motivate her to face Palpatine.

“The Rise of Skywalker” tries to set this up as she tries to connect to these spirits before, but fails, alluding to the fact that she is not yet ready to face Palpatine. The fact that the move doesn’t let her know Kylo Ren has a Sith Wayfinder needed to find Palpatine is just convenient.

I’d implement point five, by having the Wayfinder’s information immediately available to her, and instead of having her go on a useless fetch quest to find a thing to find a thing that unlocks the movie’s final boss in Palpatine, I’d have her embark on a quest for knowledge, connecting with Jedi Masters of the past who teach her different things she’d need to know to face Palpatine.

In one sequence, she’d travel back to Naboo to connect with Qui-Gon Jinn (Liam Neeson) from Episode I. In another, she’d go back to Yavin IV to connect with Obi-Wan Kenobi (Ewan McGregor), and then Yoda (Frank Oz) on Dagobah, with the final Jedi Masters being Luke (Mark Hamill) and Anakin (Hayden Christensen). Each master would be framed in the likes of the Red Skull (Hugo Weaving) on Vormir in the last two Avengers movies, in which fans recognize them, but they also have concrete functions in relation to the plot in a way that you don’t really need to know their source material to know why they’re important.

The film already goes back to some of the places where Rey would naturally find these Jedi Masters (Luke’s Island, Mustafar, Tatooine), and this way, there would at least be context for the fanservice.

Some of these ghosts could also talk to Ren, making his turn to the light side more natural. And if anything, he really needed to have a moment with his grandfather. I know Disney doesn’t like Hayden Christensen or the prequels, but because they tied Ren’s identity so closely to his grandfather, they really should have gotten over themselves and accepted all of Star Wars, even the not-so-great parts, in this final movie.

Tying all three trilogies together means reigning in the prequels, too.

The big issue with Palpatine’s return in this movie is that his character arc was already completed in “Return of the Jedi,” and this film only repeats what was done in that movie, on a larger scale. Worse yet, because it never explains why he’s back, it opens the door for future returns.

Palpatine’s return was not interesting or warranted, and was clearly crammed into this movie to keep fans from revolting. But it would have been more interesting if Snoke was actually Palpatine’s Master, Darth Plagueis.

When Snoke was first revealed, it was alluded to that he was an evil more ancient than Palpatine, with some early literature alluding to the fact that he may have been a force user older than Palpatine who witnessed the events of the original six films from the outer edges of the galaxy, which still may be true of the original Snoke template, though the one we met in Episodes VII and VIII seems to have been a clone.

Palpatine’s master, Plagueis was known for developing an ability to cheat death that Palpatine apparently implemented after “Return of the Jedi” and is something Plagueis could have arguably used on himself. Though the novel that describes his origins in depth is no longer canon, Plagueis is responsible for the plan to overthrow the Jedi in the prequels, and Palpatine merely carried out his vision, so it makes sense that a scarred, finally-healed Snoke/Plagueis would try to take over the Empire Palpatine created after his former apprentice died.

This would also allow Snoke to come back in Episode IX to develop his character some more, while adding more weight to Rey and Ren’s conflict, perhaps even giving the film a device to conjure up Palpatine and other past Sith for Ren.

Not every Star Wars film needs a super weapon. It was lazy in “Return of the Jedi,” it was lazy in “The Force Awakens,” and it was extremely lazy in “Rise of Skywalker.”

Spoilers: Every Star Destroyer in Palpatine’s secret fleet in this film has planet-destroying Death Star technology.

I get that director J.J. Abrams was trying to create a sense of urgency to destroy Palpatine’s fleet, but it completely undermines the sacrifices made in “The Force Awakens” and the original trilogy, as it’s been proven that no matter how many times you destroy these things, the schematics for them will still exist and somebody else will make another one.

Trying to destroy every Death Star in Star Wars is like trying to get rid of all the nukes in the world. There’s no getting rid of them. All you can really do is get some of your own, and force a stalemate.

Come to think of it, maybe Star Wars really needs a Cold War scenario in which everyone has planet-destroying technology and mutual destruction is guaranteed if anyone uses their Death Star technology, in order to tell good stories we haven’t seen yet.

This destroy-the-big-weapon routine is really getting old. We need more character-driven arcs.