Intro: I’ve been a fan of Greek mythology since I was a little kid in the 2000s. I’ve also been a fan of Supergiant Games since “Bastion” first came out in 2011. Now it’s 2020, and I just learned that there’s an early release build for “Hades,” a rogue-like dungeon crawler video game centered around Greek mythology that’s been in development by Supergiant since 2018.

Premise/Story: You play as Zagreus, The son of Hades who desires to escape from the underworld. His father disapproves and places monsters and other powerful underworld beings to stop him by any means necessary. Meanwhile, the Olympian gods support Zagreus’ mission and aid him through the means of Divine Blessings and Boons that he can find along the journey. As Zagreus constantly attempts to escape (basically each new run), he’ll be gaining new weapons and abilities, interacting with the denizens of the Underworld, and learning that everything isn’t as it seems at first.

Gameplay: The game is an Isometric rogue-like action RPG similar to games like “Bastion” and “Grim Dawn.” You start from the gates outside the Palace of Hades and travel through places like Tartarus, Asphodel and Elysium until you ultimately reach the surface. Each level will consist of combat rooms full of enemies and potential mini-bosses that you have to defeat using whatever Infernal Arms or main weapon you have at hand, such as the Stygian Blade (Sword), Shield of Chaos (Shield) or Adamant Rail (Machine Gun). Once you complete a combat room, you will gain a reward depending on which door you selected and what was presented beforehand in front of that door in the previous room. It could be something like “Shards of Darkness”, in which you can upgrade yourself through gemstones after every run. You also collect gold coins to buy items during that run, or a boon from a god that will give you 3 possible upgrades for the duration of the run. Depending on the god, the type of weapon you are currently using and chance, some upgrades will be more advantageous than others, but more often than not it is better to go for them. Normally by the time, you reach the final boss expect to have a lot of upgrades.

The combat is akin to a fast-pace bastion or any standard dungeon crawler/beat ’em up, where you have a light attack and a heavy attack (both of which can be charged to do another attack), a casting projectile, and a dash ability. depending on which weapon and upgrades you have, your playstyle will change, similar to how games like “The Binding of Issac” function.

The main thing I will say is that if you have a controller available then use it for this game! The gameplay was designed with a controller in mind and you will be at a disadvantage with a keyboard and mouse. That being said, the gameplay is very satisfying and the rush you get from defeating bosses that bothered you for so long makes you feel like a god (no pun intended).

That being said, when you die (and you will, a lot in fact) you will be transported into the House of Hades where you can interact with characters such as Cerberus the dog, and you can boost your relationship with them by giving them gifts of Nectar and Ambrosia, and which in return they will give you a keepsake that will give you benefits such as max health or increase the likelihood of you getting boons from a specific god. 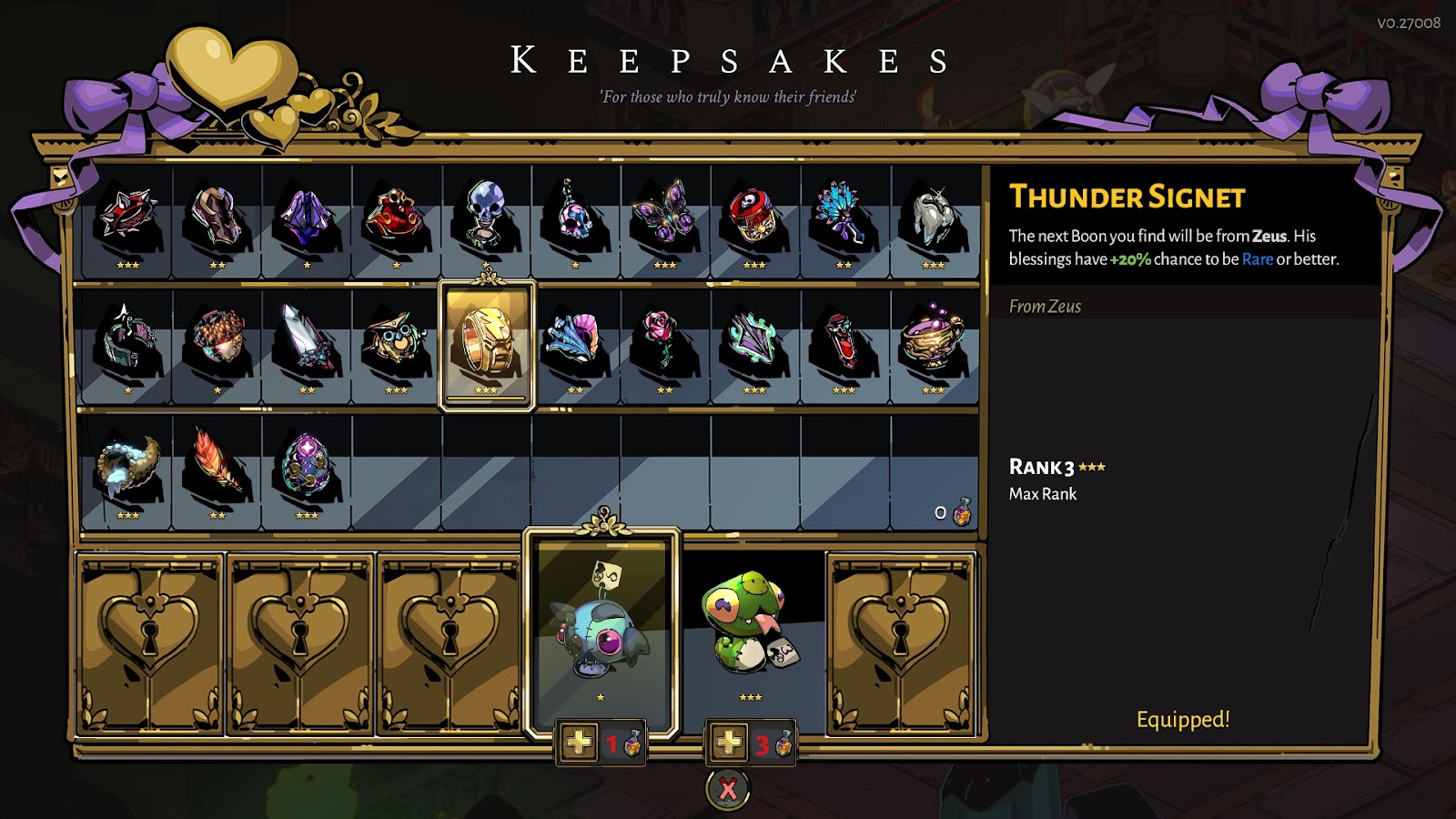 The gifts that keep on giving

Graphics/Sounds: The art direction in this game is spectacular. The designs for the gods and NPCs that you talk to has this blend of anime and western tropes all done to make the characters look as majestic and impressive as well possible, which fits the theme of this being a game about legendary Greek figures who are larger than life. The visuals during gameplay itself are a blend of bright and soft colors that makes every environment stand out from each other. For instance; Asphodel which in the mythology was a section of the underworld where originally people would be in a field of asphodel flowers is now flooded by lava which gives it a harsh red/orange hue looking like your traditional depiction of hell or a bad afterlife, and it is populated by hostile spirits on islands of scorched rock. Meanwhile, Elysium, where the more heroic souls end up, is largely untouched and has softer blue & green tones causing it to look like a heavenly cave covered by vegetation of all sorts. The music itself is done by Darren Korb who has done work for Supergiant Games before with games such as “Transistor” and “Bastion” with female vocals by Ashley Barrett, you’ll find their characters in the form of Orpheus & Eurydice. You can even buy the songs you enjoy to playback whenever you’re back in the House of Hades.

Conclusion: Normally, I don’t purchase early access games until they’re close to finished or I trust the devs. This is the case of the latter. I love the gameplay, the dialogue and the overall presentation of the game as of this state and each major update seems to improve it past a point I didn’t consider. For me, this is a must buy. However, I should state that if you’re someone that doesn’t like games that rely on procedurally-generated dungeons and if you don’t have/ don’t like playing on a controller then maybe skip this title or look up gameplay videos on YouTube before you buy.