“Persona 5 Royal” came out a little less than a month ago. Its predecessor, “Persona 5”, came out a few years ago.

There will be a post about the differences between the two games, but it would be best to just establish a foothold on the game as a whole first, so let’s do exactly that.

Per the usual, let’s examine the pros and cons, starting with the former:

1. Most of the Palaces are unique, fresh and a real treat to infiltrate:

Pictured above are a casino, a cruise ship and a castle, which are three of nine total “Palaces” that the player will end up infiltrating in order to steal their respective “Treasure.” For the most part, these Palaces are enjoyable experiences, with unique puzzles, gimmicks and combat experiences that give them all a very distinct feeling from one another. This will be covered later, but the soundtrack for almost every one of these Palaces is quite nice and further gives them their own unique identity.

2. There are near-limitless Personas in the game that can be molded to fit anyone’s playstyle 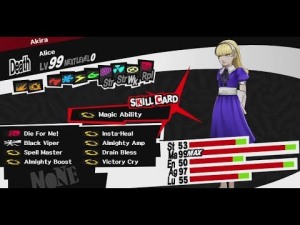 The same Persona is shown up above, but each one has a different ‘build’ with a different objective that they all accomplish masterfully. In particular, the third one is a ruthless trash mob killer which is practically invincible, while the first two aim to mow down bosses. Both ideas work just fine, and this dynamic in general extends towards almost every Persona in the game. An aesthetically-pleasing Persona which isn’t the highest of levels can still be brought to level 99 and decked out with tons of awesome goodies, so that they can contribute on the battlefield. In general, this freedom is a great thing for the player to have and naturally gives credence to all sorts of different builds.

3. For the most part, the script writing and character development are quite good

In a game which aims to highlight the social aspect as a major part of the story, there’d better be some good characters. This game hits this on the head perfectly. There are “likable” characters who are well written, such as Ann Takamaki, Makoto Niijima, Sojiro Sakura and a plethora of the protagonist’s confidants. However, there are a number of “unlikable” characters who are also excellently crafted as well, which is a tricky thing to accomplish. Goro Akechi and Masayoshi Shido are villains who the game almost forces you to dislike, but not out of anything artificial or forced, but out of having excellent character arcs and having a good presence in the game as a whole. In general, a good majority of the characters in this game are well put together and easy to enjoy.

The storyline itself is also quite good. Without getting too spoiler-deep, it is dynamic, unique and has a thrilling series of plot twists and mind bogglers towards the end that are quite rewarding.

“Persona 5 Royal” is overall an excellent game. However, there a number of not so excellent things about the game. Let’s have a closer look:

There is a distinct difference between a character who is naturally supposed to be unlikable, usually a villain, whose character arc can still be enjoyed, and a character who ends up being unlikable and for all of the wrong reasons. Morgana is firmly the latter. Morgana is immensely annoying, heavily contributes towards the hindering of another character’s presence in the story, and was generally poorly written.

For starters, Morgana is the poster child of “why bother doing something productive? You’re clearly tired, go to bed!” To be fair, this was a balancing mechanism on Atlus’ part to temper the pace of the game as a whole, but the fact that they picked Morgana to die on that hill sure didn’t help his overall negative perception.

Morgana ultimately ruins the presence that fellow teammate Haru Okumura could have had on the game in his actions towards the end of her father’s Palace. To briefly describe the situation, the Phantom Thieves, with the exception of Haru and Morgana, end up getting trapped and deceived by Kunikazu Okumura, and left unable to act as they’re sealed inside a bulletproof pod, unable to move. This leaves Haru and Morgana on the outside to confront Haru’s evil father. Here, the stage was set for Haru to get a nice, meaningful monologue about how horrible her father treats her, his employees, how he cast her away to get married to a rapist for political reasons, and how she was going to complete the act of changing his heart so she could get her loving father back. Instead, Morgana steals the spotlight away and goes through the most boring, uninspiring two minute long dialogue before the boss fight ultimately begins.

Not too long before that, Morgana’s temper tantrum where he runs away, forcing the team to track him down and try to force him into an intervention, is just horrible. Not only that, but this whole scenario takes the controller out of the player’s hands for an annoying, monotonous period of four days where they can do nothing but tediously try to reacquire Morgana’s services. It can be confidently asserted that, if given the choice, the vast majority of the playerbase would have simply let Morgana run off and die in a Palace somewhere and would’ve been done with him.

It also doesn’t help that Morgana is quite useless in combat.

This is a Palace which could be ripped apart in a scathing ten thousand word review, and it still wouldn’t be enough to accurately and wholly describe purely how much this whole part of the game just sucked.

The story, as mentioned previously when discussing Morgana, was really, really poorly written. However, let’s talk about why the gameplay of this Palace is just terrible.

In just about every other Palace in the game, there is room for tactical maneuvering and critical thought. Sure, the player can always just gung-ho through every enemy, beat the boss and call it a day. Alternatively, sneaking around and taking a stealthy approach, while generally trickier, is a viable option 8/9 times.

The “8/9” remark stems from the fact that Okumura’s Palace is the only one of nine Palaces where this layout of options just isn’t a thing. Much of the Palace is very linear and bare, without room to do more than one singular thing the vast majority of the time. Often, the player will find themselves forced into combat without the option of trying to sneak past the patrolling robot. This isn’t much of an issue for the New Game+ player, who can likely just one-shot whatever the enemy is and call it a day, quick and easy, but for a first impression, this is ultimately a negative trait about 75% of the Palace that makes it stale very quickly.

The puzzles and gimmicks of Palaces apart from Okumura’s are usually thematically in line with the Palace Ruler and what their distorted desires are. In the plagiarizing artist Madarame’s Palace, one major puzzle is about trying to discern which of his pieces of painting was actually painted by Madarame himself, and which ones are fakes or ones that he stole from someone else. In the corrupt politician Masayoshi Shido’s Palace, one recurring major gimmick is trying to take advantage of his traps that turn the player into mice in order to overcome his puzzles, as a way of turning his view of society as a bunch of rats against him. In Okumura’s Palace, we have the same tired gimmick of pulverizing his worker robots over and over again in a few different conflicts and a puzzle. This could be viewed as him sending his workers to do the dirty work for him and paint him in a negative light, which wouldn’t have been the worst idea if this was a secondary puzzle or gimmick to something much more reflective of his character. And that “something” doesn’t actually exist in this Palace. His puzzles and gimmick fail because they don’t fall in line with every other Palace in the game, and the dynamic deviates for unenjoyable, overall unsuccessful reasons.

That much extends to the design and soundtrack of the Palace. Where the artist Madarame’s Palace is a museum, the mafia boss Kaneshiro’s Palace is a bank and the prosecutor Niijima’s Palace is a casino, Okumura’s Palace is a spaceport. Why is that? He’s a terribly greedy business owner who overworks and underpays his employees. A factory of some kind would’ve been the obvious choice. But as it should be easy to see, this Palace as a whole was just trying to reinvent the wheel and failing about as fantastically as possible at doing so.

Finally, the final boss fight in Okumura’s Palace was just terribly constructed. After spending potentially hours fighting hordes of his employee robots, this fight could simply be chalked up to just fighting more of his robots, before fighting the big-bad boss at the end who is just a really large robot. Okay, but the player beats up all the robots, Okumura’s out of reinforcements, now’s the part where Okumura himself turns into something big and bad as a last ditch effort to protect his Treasure, right? Nope, Okumura remains in his shadow form unlike every other Palace Ruler, gets one shot, and that’s it. The boss fight itself is long and annoying, since the robots are all very tanky, have resistances to nearly everything, and use horrifically annoying tactics to try and win, like running away and replacing themselves with healthy replacements, afflicting the player’s units with the Hunger status, and more.

After such a long, tedious experience, beating the Palace should have been a a triumphant experience, of overcoming a series of challenges. But the feeling can more closely be compared to agitation, maybe even relief. The Palace isn’t a unique experience of challenges that call upon deeper thinking or crafty maneuvering to overcome. It’s just this annoying swath of mechanics that don’t reward the player for being genuinely skilled, and just serve to eat up a ton of time.

For as horrible as Morgana and Okumura’s Palace were, the final grade would likely have been something akin to an S+ had they not existed, or been dramatically different. This game is, 90% of the time, going to be one of, if not the greatest games the average person has ever played, and there is nobody out there who wouldn’t thoroughly enjoy this one. Just be prepared for a genuinely terrible 10% of it.