Courtesy of the popular Youtuber “Pikasprey“, an incredibly well made Pokemon ROM hack has been getting a lot of attention since its release. “Crystal Clear“, a redone version of the original “Pokemon Crystal“, markets itself as uniquely being an open world Pokemon game, enabling the trainer to go wherever they want right from the moment they begin the game. In addition to a swath of quality of life adjustments, this game has been attracting tons of popular, optimistic attention.

Has it earned it? Let’s assess Shock Slayer’s work by beginning with the positive traits of the game:

Hasn’t it ever felt odd being pretty much the only person in the world with a Charmander? Why has Professor Oak, in his many, many years of studying Pokemon, ever had another one of these things? Well,” Crystal Clear” offers a fresh new look on choosing the player’s opening companion. Moreover, the game implements a “difficulty setting” based on the player’s choice, which is also unprecedented. Selecting starters such as Unknown or Smeargle grants the player the Hard mode, while selecting Porygon grants the Easy mode, with plenty of middleground options in between them. Old timers can still have their pick of generation one or two starter Pokemon, while those seeking to broaden their experiences have a swath of alternate options.

2. The game delivered on its promise of being open world

Right from the get-go, the player can go pretty much anywhere they want. The Elite Four is off limits until earning eight badges, but any other town in between Kanto and Johto is immediately accessible, as are all the gym leaders. Tired of facing Falkner first in every single second generation game? Save him for last, where he will do battle utilizing his terrifying Zapdos and significantly improved and buffed Flying type team. The best part about this is, trainer and gym battles scale with accordance to how many badges the player has. In other words, wandering into Clair’s gym as the player’s first trek will see the Dragon type master use a Horsea as the ace on her team. Venturing into Clair’s gym as the last gym leader of the sixteen to take down will see her boasting a team of four Dragonites, a Charizard and her signature Kingdra, all level 75 and ready to kick an unprepared player’s ass. The open world aspect of this game really gives it wings, and is largely what makes it so thrilling and full of replay value.

3. This game can connect with old systems and games!

Unhacked second generation games and “Pokemon Stadium 2” for the Nintendo 64 are indeed compatible with this game, so long as the player is not attempting to use a Pokemon with an illegal, or hacked, moveset. This extends the game’s influence, and is also quite unique for a ROM hack, as these are traditionally not interactive with other mainstream games. Because “Crystal Clear” offers cool things like a Generation 1 TM Move Tutor, they could theoretically send a Pokemon with a Generation 1 exclusive move to a generation 2 game, something that was only conceivably possible way back when Game Boys were the contemporary system, and the games themselves were a lot more common amongst Pokemon players.

It is truly difficult to find a completely perfect game. “Crystal Clear” does come quite close, but there are a couple minor nicks that hold it back ever so slightly. Let’s check these out:

1. Wild Pokemon Encounters should scale down the same way as Gym leader and trainer battles 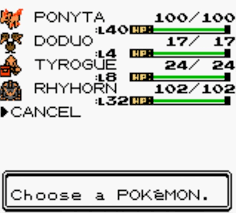 … Or the player’s team ends up potentially looking like the image shown above.

There are three reasons why Shock Slayer should have made wild encounters scale alongside the player’s badge count. The first is that, while the game is technically open world, this is a little bit shaky in practice because tall grass across the game does not scale with the player’s badges. Everywhere, from the first route in the game all the way down to Victory Road is immediately accessible, so the player with their level five starter can quickly find themselves getting overwhelmed by an endless sea of overpowering level 40 Pokemon that they have no chance against. This makes actually travelling prohibitively difficult in some areas, serving to slightly undermine the game’s “open world” experience. The second reason is largely the opposite; the player choosing to save one of the first gyms for last will find themselves underwhelmed by the lack of strong wild Pokemon to train their team against, as they prepare for the incoming gym battle. The third and final reason is that accessing and potentially catching level 40 Pokemon can serve to initially trivialize the game, until the player has enough badges to make the game scale to their high level Pokemon. There isn’t a particularly good reason wild encounters shouldn’t scale with the player’s badge count, and there would undoubtedly be benefits in enabling this.

And that’s about it for negative criticisms for this game, really.

A different and undoubtedly positive take on the renowned Pokemon franchise, “Crystal Clear” is an excellent overall game.