As a follow up to this article made months ago, “SpongeBob SquarePants: Battle for Bikini Bottom – Rehydrated” has now had just over two and a half months to make itself known on the video game industry. The aforementioned article talked about the game in a very positive light, predicting and speculating the features that the game would boast.

Now that I’ve been given ample time with the game, it’s time to review it. Per usual, let’s start with its pros and cons.

Starting with the positives:

1. THQ Nordic delivered on their promises

This game is a straight up remake of its 2003 version. That is exactly what THQ Nordic promised. In that regard, they did as they said they would; recreated the greatest “SpongeBob” video game ever, while also implementing a small handful of quality-of-life updates and cleaning up bugs that the original had in them.

2. The graphics, as expected, are absolutely beautiful 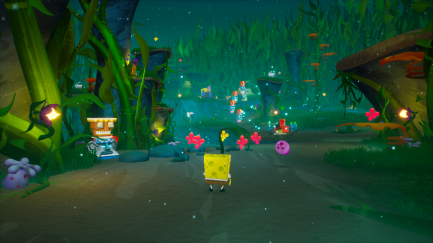 As THQ Nordic showed many, many times over in their many pre-release streams, the graphics of this game are astounding. It is difficult for a game in 2020 to stand out the way this game does visually, but it’s cartoon style looks great on current-gen consoles.

3. This game is achievement heaven for trophy hunters

For PlayStation users, this game can reward the player with the highly desired Platinum trophy within a single playthrough of the game. Because the game is generally pretty easy, this means a Platinum is just a typical playthrough, mixed with a little bit of tedious sock hunting and shiny object grinding away from earning a Platinum trophy.

This game, unfortunately, is not perfect. Let’s take a look at what went wrong:

1. The online mode is terribly boring and has no sustainability

Two players select their character, spawn into the world, beat up a bunch of robots and then call it a day. Actually doing so without “dying” at least once becomes immensely challenging towards the end of the course, which would seem to give multiplayer positive value via its unexpected challenge. Unfortunately, that all goes down the drain with one square fact: Even if both players “die”, they will both just respawn where they were and continue, as if nothing ever happened. Death innately bears no consequence, which makes the whole experience much less challenging, less risky, less intense and overall forgettable. The fact that Robo-Squidward doesn’t even directly challenge the duo, and is mostly a dynamic background at most, was probably the most disappointing.

The promise of having a wide variety of characters to play this disappointing mode with is also significantly less appealing than it initially seemed. Every character plays close to the same as each other, with the exception of Squidward. Apart from Squidward, they all have mostly the same moveset and have no significant differences from each other. Squidward is so incredibly overpowered because he is one of only two characters to wield a projectile, which means a Squidward player will vastly outperform anyone else, leaving them with little to actually do apart from watch their friend beat up entire hordes of robots by spamming a single button most of the way.

Overall, the Multiplayer mode by itself was a resounding failure, and earns an F on all accounts by itself.

2. The game is far more linear than its original counterpart

In removing many of the game’s bugs, THQ Nordic actually forces the player to play the game the way it was intended, unless you’re popular Spongebob speedrunner SHiFT, who basically broke the game on day one with his “menu glitch”.

While this may seem like a good thing, it does take a lot of appeal from the game away from a speedrunner’s perspective. Part of what essentially “revived” the original “Battle for Bikini Bottom” and kept it in the spotlight even in the mid 2010s was the speedrunning community. “Battle for Bikini Bottom” speedruns were popularized by players taking advantage of the many bugs in the game, that enabled players to take many more, different paths to complete the game as quickly as possible. With those bugs gone, the game is a lot less loose and free, and less enticing to speedrun as a whole.

For the most part, THQ Nordic achieved exactly what they set out to do; they remade this game. Unfortunately, due to the second con, its original will likely outlast it over the course of time, which is a rather troubling sentiment to have. That said, the casual player will still enjoy this game just as they did the original, which in itself makes the game a success overall.